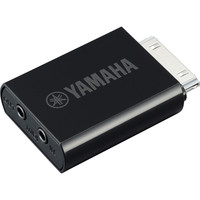 Dedicated applications from Yamaha offer new ways to play instruments: For those who have i-MX1 and Yamaha synthesisers there are lots of applications that will expand the functions of your instrument. Each App can be easily used just by connecting the instrument and iPad / iPhone with i-MX1 cable. You can edit the sound of Motif XF or MOX using the large display of iPad. Also the additional functions such as drum pad or arpeggiater can be easily added to your synthesisers. Play your instruments with the Core MIDI compliant Apps: Your MIDI instruments will be expanded with all the Core MIDI compliant Apps on the market. For example you can practice the piano songs using a digital piano and Notation App record your drum pattern using an electronic drum kit and music production apps or play a variety of sounds using synthesisers and virtual instrument apps. All these combinations can be realised in many ways by using i-MX1 and instruments. Features/Specifications: Compatible Devices: iPhone 4S iPhone 4 iPhone 3GS iPad (3rd generation) iPad 2 iPad iPod touch 4th and 3rd generation Compatible OS: iOS 4.2 or later Compatible Applications: Core MIDI compatible apps Connectors: 30-pin dock connector MIDI IN MIDI OUT Package contents: 2 MIDI cables Owners manual Yamaha Recording-and-Computers JXP