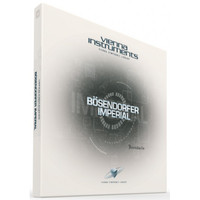 With the support of Bosendorfer Klavierfabrik – the Vienna Symphhonic Library team has developed its first sampled grand piano software instrument a true recreation of a B?dorfer 290 Imperial that was tuned and regulated by the piano manufacturer s best engineers and piano technicians. The Vienna Instruments Collection Bosendorfer Imperial makes full use of Vienna s new proprietary engine and performance algorithms including automatic repetition performances. Its massive and unprecedented 54 GB sample set includes unlooped sustain samples in pedal up and pedal down variations and in 7 velocity layers tone repetitions real recorded sustain pedal resonances multiple release samples and key noises. The Bosendorfer 290 Imperial is the only concert grand in the world to have nine sub-bass notes extending downward to low C and giving it a keyboard range spanning eight octaves. These extra notes not only provide added richness and depth to the instrument overall but they enable the performance of works originally scored with lower notes by composers such as BartDebussy Ravel and Busoni. For the first time in the long history of piano sampling the sound of the piano in its resonating state with the sustain (damper) pedal depressed has been captured. This results in the physically correct recreation of the piano s resonant character in both pedal-down and pedal-up positions. With the B?dorfer Imperial Vienna Instrument there are no sample manipulations no fades between tones and no DSP calculations just an absolutely natural acoustic image of the actual processes that occur during piano playing. The Vienna team has developed a recording process that adds to a single tone the exact sound that is created when the pianist presses the piano s sustain pedal allowing other strings to vibrate. So the Vienna Instrument acts just like the piano itself creating the characteristic pedal tone sound which now for the first time is available in the shape of samples. Another innovation is the Repetition Performances. These samples take into account the sound created when a vibrating string is struck again. With Vienna Instruments B?dorfer Imperial repeated notes of the same pitch are actually played repetitions meaning that a new sample is heard with every keystroke. Apart from the acoustic perspective of the pianist the user is also provided with concert hall audience perspective for proper imaging on the orchestral stage. Each of the two listening positions totals at 4675 samples. The Bosendorfer Imperial Collection is not divided into Standard and Extended Libraries like other Vienna Instruments Collections the Standard package includes the full set of samples along with the software instrument/engine. Requires the Vienna Key. Best Service Recording-and-Computers 8CH