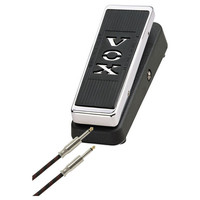 From the developers of the worlds first Wah-Wah effect VOX brings you the V847 Wah-Wah pedal with specifications based off the original pedal of the 60s.