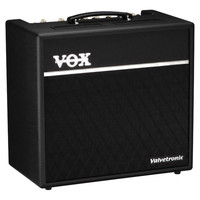 Introducing the new Valvetronix+ Series – the latest in Valvetronix evolution featuring 99 ready-to-play presets a massive infusion of effects plus an all-new Power Level control. Of the broad lineup of VOX amps – from large all-tube amps to mini transistor amps – the Valvetronix Series is acclaimed by the broadest range of musicians and is being used in the widest variety of musical scenarios today.