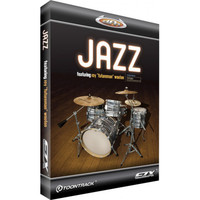 This Jazz EZX features samples performed by the legendary Drum Virtuoso/Pioneer Roy “Futureman” Wooten. In the fall of 07 Toontrack began the Jazz with Futureman at the impeccable Blackbird Studios. His passion and knowledge of Jazz history met with a relentlessly energetic and musical approach to single note striking that left the Toontrack crew in utter disbelief.

Futureman is a multiple Grammy award winning composer inventor and multi-instrumentalist who has been a pioneer in using sampled drums since 1985. He has shared the stage and numerous albums with many Jazz legends. Roy started playing acoustic drums as a young child with his brothers in Virginia. From that he has come a long way and is now renowned for playing what is called a SynthAxe-Drumitar to trigger drum samples. As an instrumentalist Roy Wooten strives to employ the power and science of Mother Nature and his percussive technique takes playing drums way beyond just simple time keeping. His approach is a much more all-encompassing and universal one. Futureman views himself as a storyteller playing music to reach beyond the limits of common musical understanding. He invented and built the Drumitar to be able to voice his own revolutionary approach to Jazz with the groundbreaking group Bela Fleck and the Flecktones. As a result Futureman has performed using Toontrack Music samples to an audience of millions live at some of the most popular and critically revered performance halls clubs TV shows and festivals on the planet. Through Roy Wooten our sounds have made it through to the airwaves of places like Carnegie Hall and premier Greenwich Village Jazz club Blue Note. Throughout our history of creating sample libraries and instruments we have strived to both innovate and preserve in all areas of performance engineering and genre. In creating this library we went to new and unheard of levels of dynamic. The recordings feature layered sampling with numerous mic stems fronted by recording chains we had previously only dreamt of. In the fall of 07´ we began the Jazz with Futureman at the impeccable Blackbird Studios. His passion and knowledge of Jazz history met with a relentlessly energetic and musical approach to single note striking that left the Toontrack crew in utter disbelief. Roy hears every single hit and swirl recorded as part of a larger whole as part of a musical sequence rather than as solitary monotonous hit. The results are samples that strike with intensity and force lending unique scope and musicality to these recordings. The recordings for the Jazz EZX set a benchmark for how sampling percussive instruments and musical instruments in general will be done in the future. Minimum System Requirements: Windows XP PIII/Athlon 18GHz with 512 Mb of RAM Mac OS X 10.4 G4 1GHz with 512 Mb of RAM 750 Mb free hard disc space DVD drive A working EZdrummer or Superior Drummer 2.0 installation Toontrack Music has had the privilege to capture the magic of Futureman. His touch his heart his philosophy and his unique approach to his craft in this Jazz EZX. The story of jazz drums has a new chapter… Toontrack Recording-and-Computers 9YX