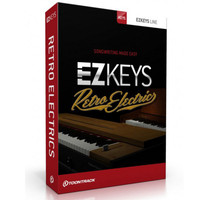 The EZkeys Retro Electric virtual instrument by Toonrack is a revolutionary plug-in and stand alone instrument that acts as a world class piano player song-writing partner arranger and sampled instrument all in one. The ground-breaking functionality allows unlimited creative options whether you are a beginner or a seasoned studio pro.

EZkeys Retro Electric comes with a superbly sampled Hohner Clarinet D-6 and Pianet N. These Hohner instruments are famous for having a distinct sound and have been heard on many hits from the golden age s of funk soul and British invasion. The Retro Electric library combines playability with world class sounds making them ideal for stage and studio. The sounds were mixed to sit perfectly in a production environment without any additional tweaking. Your sound options seem almost endless with a selection of ready-made and user controllable presets available. With a host of revolutionary and creative songwriting features EZkeys gives you the ability to transpose full MIDI tracks on the fly and use the ground breaking EZkeys Chord Wheel to customize chord voicing and harmonic colour with just one mouse click. Features & Specifications 32- and 64-bit VST AU and RTAS instrument as well as low latency stand-alone application Drag and drop the included MIDI straight to the built-in song track Drag and drop support for your own or third party MIDI straight into EZkeys Drag and drop MIDI from the song track or directly from the song browser to your DAW or to your desktop EZkeys will analyze and chord-separate any MIDI on the fly Record or overdub MIDI directly in EZkeys Use your own the included or any third party MIDI/chord progressions and transform with playing styles found in other MIDI files Quickly add basic chords to the timeline or drag and drop any chord from the Chord Wheel Real-time chord display that enables you to instantly see what chords you are playing Chord selector based upon the circle of fifths allowing you to change chords instantly Presets for the most commonly used chord types Customize the coloration of any chord by opening up the detailed view Alter the voicing of a chord on the fly by clicking the ? or + buttons in the Chord Wheel “Humanise” any pre-quantized MIDI upon import in EZkeys Transpose individual song blocks or full songs Export songs or files as wave files straight from the EZkeys interface Comes with an easy to understand music theory document including MIDI examples Possibility to tune the piano by octave semitone or cents Dynamics controls that let you adjust the velocity response to match your keyboard or playing style Three pedals: sustain sostenuto and damping MIDI-learn and automation Ready-made presets utilizing high-quality effects from Overloud. The presets range from raw and unprocessed to heavily tweaked Retro Clavinet Presets Clean Funk: Run through a classic amp model a 4×12 cabinet combined with a tape simulator and a spring reverb this setting is still relatively clean and shows the nature of the instrument very nicely. Classic Wah: A classic sound for any riff-driven song. This setting includes compression amp/cab simulation delay and of course the unmistakable wah-wah. Dirty Fuzz: A quite distorted sound saturated with reverb various amp/cam simulation and a knob for an optional phaser effect. Filter Funk: A round but bright staccato-like sound that brings you right back to the golden age of funk in the 70s. Wah-wah and tape delay! Guitar Like: Just like the name implies this preset brings out the Clavinet?s string-sound in great way. Perfect for rhythmic passages or guitar-like riffs. A true funk sound at its best! Modern Ballad: Tremolo inverse reverb and a subtle chorus makes this setting the perfect match for a modern soulful ballad. Retro Pianet Presets Clean Amp: A quite unfiltered signal amplified by a low-gain amp and a classic 4×12 cabinet. A very allround sound that works in anything from a soul ballad to a funk song. DI: Direct in signal with optional knobs for tremolo settings. Dirty Amp A stomp box and a vintage amp give this preset an extra gritty sound perfect for leads staccato-playing or general riffing. Dream Vibrato: A classic amp and a 1×8 speaker simulation together with vibrato and spring reverb produce a distinctly distorted very vintage and organ-like sound. Works well in anything from a ballad-scenario to an uptempo 70s rock song. Hi Gain Distortion: A slightly muffled sound with a roll-off on the highs. Jazz Bells: With its obvious tremolo and bright reverb this setting brings out the bell-like sound in the Pianet. Great for a jazzy ballad! Phase Fuzz: With its strong fuzz and phaser saturation this sound almost elevates in the stereo field. Great for anything from big open chords to tight funky riffs. Rotary: A relatively clean sound that combines a classic cabinet with a delicate room reverb. Allround! Smooth Funk: It doesn?t get funkier than this. Wah-wah classic amp/cab combo tape delay and moderate compression produces a sound that brings you right back to the 70s. Space Ballad: A tremolo-driven sound perfect for any ambient composition. Toontrack Recording-and-Computers 107V