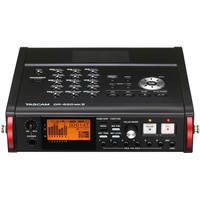 The Tascam DR-680MK II is a portable multichannel recorder with the ability to record up to 8-channels in either WAV or BWF format or simultaneous recording of MP3 files up to 4-channels. 6 mic/line inputs mean you can record live music with multiple mics with no problems and the TASCAM HDDA mic preamps result in high quality recorded audio every time.

6 Mic/Line Inputs and Digital Input Channels Simultaneously record up to 8 tracks at 96kHz/24bit. Featuring 6 XLR/TRS inputs with phantom power and a digital input for added versatility. You have the ability to record live music with multiple mics capture sound effects in surround or document film shoots or events with multiple microphones. When you dont need the digital input a two-channel mix can be recorded to tracks 7 and 8. The internal monitoring mix can be recorded as a stereo track with completely separate level and pan settings from the 6 independent tracks. Share a stereo mix immediately while retaining the multitrack version for mixdown. TASCAM Premium HDDA Mic Preamps Microphone preamps have a significant impact on the quality of the recorded audio. The DR-680MK II has HDDA (High Definition Discrete Architecture) mic preamps designed by TASCAM with carefully selected components. Each HDDA mic preamp is built with a differential amplification circuit that employs a discrete architecture and made with parts selected for their audio quality. These preamps also provide +48V phantom power. 8-channel Recording and 4-channel MP3 Recording In addition to the WAV format this unit can also record in BWF format; which stores the recording start times in the metadata. Using the WAV/BWF format the DR680-MK II can record 8 channels at 96kHz/24-bit (6 tracks and stereo track) or 2 tracks at 192kHz/24-bit. Simultaneous recording of MP3 files with up to 4 channels is also possible at 96 128 192 and 320 kbps. This allows efficient control of file sizes when in situations requiring long recording times. Stereo or mono file can be selected for the file type. Digital Output and 6 Unbalanced Line Outputs The unit has a built-in coaxial digital input and output (S/PDIF AES/EBU) and 6 unbalanced line outputs. By connecting a mixer to the outputs this unit can be used as a 6-track playback device. Mic-side Mic Decoding Mode The built-in mid-side decoder enables use with mid-side stereo mics. The 1-2 3-4 and 5-6 channel pair can each be set separately. Decoding is possible during recording or whilst monitoring. Cascade and Gang Function When using the cascade function the master unit controls the rec/pause start (front of unit) and the stop and play/pause keys (on the top) from multiple DR-680MK II units at the same time. The Gang function allows multiple linked channels to be controlled at the same time on the trim pan and level screens. Rugged and Transportable The DR-680MK II uses SD SDHC and SDXC cards when recording or for media playback. The compact form offers excellent vibration resistance along with the included shoulder strap. The unit has a built-in folding stand for tabletop use making operation easy in nearly all situations. Tascam Recording-and-Computers 16M3