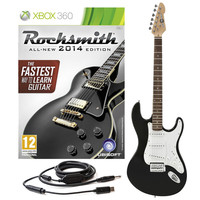 The revolutionary Rocksmith game is back! Rocksmith 2014 is the 2nd game in the Rocksmith series and introduces a host of new and improved features for guitarists to explore. Whether youre starting from scratch or an experienced player the new Rocksmith game has something for everyone. This exclusive Rocksmith guitar bundle includes the Rocksmith 2014 game with Real Tone cable the LA Electric Guitar in black gigbag and jack. Please note: This game carries a PEGI rating of 12. Xbox 360 required to play Rocksmith (console not included).