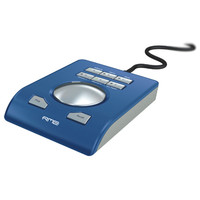 The wired Advanced Remote Control (ARC) is designed for direct access to your most used actions and commands in your studios daily work.

The extremely flexible configuration through TotalMix FX simplifies your workflow and will greatly increase the usability of the RME interface in any real-world situation. The ARC can be used with all of RMEs Fireface UCX built after June 2011 or higher. The remote control is housed in a solid metal case with controls which include a main encoder dial 2 push buttons and 6 LED-equipped buttons. The ARC connects to the main interface via a 5m cable and special connector on the back of both units. Use the rotary encoder to change various parameters such as gain and volume. The left button Prog can perform several functions and is programmable. The upper 6 buttons include an LED to signal their current state. The ARC provides default settings for the 7 programmable buttons but can also be freely configured via the Key Commands dialog box of TotalMix FX. Several functions can be activated at the same time and a fixed set of functions is activated when there is no TotalMix FX on the host computer. Features / Specifications Supported Interfaces Fireface UFX Fireface UCX Rme Recording-and-Computers VME