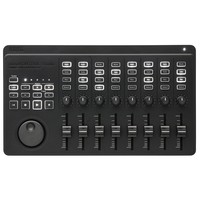 The Korg nanoKONTROL Studio MIDI Controller is a portable Bluetooth MIDI controller that can be used on the go to control digital audio workstations on PC Mac and iOS devices. With built in faders buttons rotary encoders and transport controls the nanoKONTROL provides comprehensive control over your DAW. Powered by batteries or via the USB connection the nanoKONTROL is suitable for any scenario and is the perfect MIDI controller for active producers or DJs.