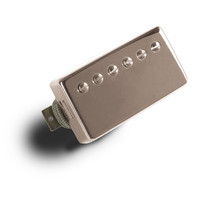 IM57A-NH is slightly underwound with medium “vintage” output and works well in both bridge and neck positions.

BurstBucker pickups from Gibson Gear now give guitarists a choice of three replica sounds from Gibsons original “Patent Applied For” pickups – the pickups that give the 59 Les Paul Standard its legendary sound. The three BurstBuckers – all with unpolished magnets and non-potted coils like the originals – represent the variations found among vintage Gibson humbuckers. The initial demand for Patent Applied For replica pickups came from Japanese collectors and the BurstBucker was offered exclusively in Japan beginning in 1996. By 1999 word has spread of the unique replica tones produced by BurstBuckers. Gibson USA put the first BurstBuckers on a production model with the Gary Moore Signature Les Paul in the Summer of 2000 and Gibsons Custom division then equipped the Class 5 Les Paul Custom Authentic 68 Les Paul Custom and Custom Authentic 58 Les Paul Standard models with BurstBuckers. The variations in pickup output and tone came from inconsistencies in winding the bobbins a result of the lack of automatic shutoffs on Gibsons winding machines in the late 1950s. Seth Lover who invented the humbucker always said they wound the bobbins “until they were full” and original examples suggest that employees stopped the winding machines after the counter reached approximately 5000 turns. When the two coils in a pickup have a different number of turns that variation puts a little “edge” or “bite” on the classic humbucker sound. Thats the sound BurstBuckers replicate. (The “creamy” sound that Gibsons 57 Classics replicate comes from equal coil windings.) Gibson then carries the replication process two steps farther with unpolished Alnico II magnets and no wax-potting of the coils just like the originals. Gibson Guitar-and-Bass 9OZ