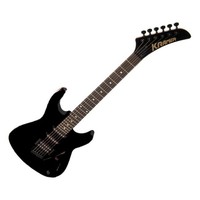 The history of Kramer Guitars began in the mid-1970s. In 1982 Kramer wanted to be more competitive in the emerging “heavy metal” market and Kramer cemented an exclusive distribution deal with Floyd Rose. At that time Kramer became the only brand to introduce the world to the new and revolutionary Floyd Rose Locking Tremolos. The great Floyd Rose equipped Kramer guitars were loaded with additional features like Schaller tuners and Seymour Duncan pickups and made Kramer the clear favorite of the 80s metal guitar players. Kramers artist roster quickly rose to house the biggest baddest meanest loudest fastest and best Guitar Stars in the world.

This Kramer Pacer offers thin neck great action with a great pickup configuration. All at an affordable price! 11 Years ago the Gibson Guitar Company bought the revered Kramer brand which by then was completely defunct. Kramer had risen so quickly to guitar brand dominance only to have the same type of exciting ride which led the brands sad demise. The king of guitar brands slowly burnt out almost as quickly as it began. Being a leader in worldwide guitar manufacturing themselves Gibson knew the brand was something special and also that they could once again bring the brand back to being a leader in the industry. Since the time of the Kramer purchase Gibson has reissued many of the historic Kramer models which allowed Gibsons guitar making prowess to make the products EVEN BETTER than the originals! Today Kramer is poised once again to take metal by the horns. With Kramers newest and baddest models ever it is the leanest meanest shred division of the Gibson family offering modern design innovations as well as classic features that hail back to the era that once made and will make it again king. Look for the new Kramer models and let them take you for your own historic ride on one of the world?s best and most famous guitar brands in the world. The Kramer roster was obviously led by Eddie Van Halen who took the Kramer and Floyd Rose combination to heights never even conceived by existing guitarists. The story goes like this – Eddie had been interested in finding a tremolo that stayed in tune which would be more stable and versatile and than existing tremolos. When a meeting between Eddie Van Halen and Kramer execs took place Eddie was quickly sold on the opportunity and he reportedly quipped that he would help make Kramer the “#1 guitar company in the world.” In addition to Van Halen Kramer players included a who?s who of rock guitarists including Ritchie Sambora Mick Mars Vivian Campbell and many many more! Features/Specifications: Body & Bridge: Body: Alder and Nato Bridge: 2-Point Floating Fulcrum Tremolo Colour: Black Metallic Neck: Neck: Maple Bolt Neck / Rosewood Scale: 25.5″ Pickups & Hardware: Pickups: 2-Single Coils 1-Humbucker Kramer Guitar-and-Bass 9NV