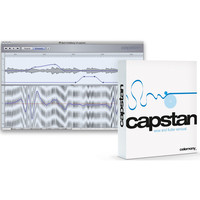 Celemony Capstan Wow And Flutter Removal Software is an audio restoration tool developed by Celemony for processing and revitalising old audio mediums such as vinyl and tape reels. A lot of great music has been recorded to vinyl and cassette the only down side is these mediums warping and warbling resulting in the loss of harmonic integrity and overall sound quality. Celemony Capstan has been developed to revilitise old audio with its unique restoration process resulting in clean polished audio. The software has been used previously to restore many recordings most famously for the legendary Frank Sinatra recordings from 1963.

Precise Intuitive Control Correcting old audio is a temperamental process with a lot of trial and error. Every piece of audio is totally different meaning that the sound needs to processed in a different way to other musical pieces. With Capstan you can precisely control how much of your audio is affected letting you find the perfect balance between the original recording and the restored audio. The software is also highly intuitive with Capstan detecting how much wow and flutter needs to be removed and reined in .The correction is effected through varispeed meaning it will not introduce any artifacts to the restored recording. Whether you are restoring tapes that have been copied over and over or old vinyl that has become dusty and slightly warped Capstan can react accordingly to any medium. Intelligent Restoration Celemony are renowned for their award-winning algorithms with their technology being used as keystone in most industry recordings. The Capstan algorithm will recognise and retain the smallest amount of wow and flutter and also analyse and correct any speed variations within your audio. The detailed editing process gives you the option to draw in the curve by hand giving you a visual representation of your restoration process. Celemonys patented DNA (Direct Note Access) technology is used to detect note deviations this powerful technology is also found in Celemonys Melodyne software that is used in Major Studios all over the world. Features Corrects Wow and Flutter Problems Restore old analog recordings Support for WAV AIFF SND AUD and RIFF audio formats 16 – 32-bit depth Sample rate up to 192 kHz Based on Melodynes DNA algorithm For mono stereo multi-channel or multi-track recordings Runs on Mac or PC and requires no additional hardware Correction through varispeed – guaranteed free from artifacts Works even when a tape has already been copied several times or has been digitised in low resolution Specifications Mac Intel Processor OS X 10.5.8 or later 4GB RAM or more iLok Dongle Windows Windows 7/64-bit 4 GB RAM or more iLok dongle Celemony Recording-and-Computers 1G9Q