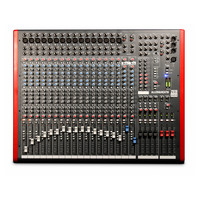 The ZED-420 has a fantastic pedigree which comes from nearly 40 years of making mixing desks for the professional sound community. The audio circuitry is based on years of continual development and refinement and the performance of all the elements within the mixer is has been perfected to ensure the very best sound quality possible. This is a mixer for anyone from entry-level to professionals who appreciates fantastic sound rugged build quality and imaginative feature sets. Itll be equally happy running your gig on stage recording live or mixing down in your studio at home.

Allen & Heath have teamed up with major software supplier Cakewalk to bundle its SONAR LE music creation and audio production software with ZED giving you a fantastic high spec digital audio workstation. The ZED 4-Bus series takes inspiration from different product lines within the A&H range combining them with fresh new ideas to give stunning results in a neat and easy to use package. The padless DuoPreTM mic/line pre-amplifier is the new design first implemented on the ZED-14 and delivers a high-headroom low-noise signal. The 4 band 2 sweep EQ along with the low noise summing amps is borrowed from the acclaimed GL2400 while the bus architecture is a simplified but equally comprehensive version of that employed in the successful GL series. The USB audio interface with its uniquely flexible capability allows different signals to be sent to USB from LR or from selected aux buses. The USB return signal can be routed straight to the LR mix or to a stereo channel. The connectors are placed on the top surface for easy plugging & patching and the construction with individual circuit boards firmly nutted to the top panel is as rock solid as Allen & Heaths top of the range ML Series mixers. Also included with ZED 4-Bus is the excellent SONAR LE digital audio workstation software for Windows with audio and MIDI multi-track recording and mixing capability effects plug-ins and editing features enabling the ZED 4-Bus mixer to become a live recording or home recording mixer. Inputs – One of the great things about the ZED series is the number and variety of things you can plug in. In addition to the sixteen mono channels there are two dual stereo channels each with a main stereo input on jack sockets and with additional inputs on phono sockets. the USB return can be selected to one of the additional inputs so that it feeds either the main LR bus or the stereo channel. DuoPreTM – Based on the proven pre-amps from the hugely successful PA series the ZED series has new DuoPreTM pre-amps which use a two stage design with carefully controlled amounts of gain in each stage. When amplifying the signal from the XLR input the gain range is huge – 69dB of range to be exact – and is very evenly distributed around the gain control meaning better control of signal level. Most of the gain comes from the first stage so unwanted noise is kept to a minimum. Line level signals are simply plugged into the second stage of the pre-amp by using the line input jack socket which has the great advantage of less noise when using the line input. EQ section – ZED-420 features a responsive 4-band EQ taken from the acclaimed GL2400 mixer. The design utilises MusiQ – optimised slope (or Q factor) for equalising individual instruments. Auxiliary sends – 6 aux sends are provided of which 1&2 are prefade for foldback monitoring and 3 & 4 are switched pre or post-fade for effects sends. and 5&6 are post-fade. Auxes 1&2 can be sent to the USB bus for recording pre-fade signals independently to the main mix. Auxes 5&6 can also be sent to the USB bus for use as effects sends. USB audio flexibility – Getting audio to and from a computer easily is now a common requirement for live sound and music production. The way we have implemented this on ZED is super-flexible and super-easy! No longer do you need to fiddle around the back of your PC to get to the soundcard inputs only to find that the levels are all wrong and noisy. Just plug in a USB lead to your ZED select the USB routing on the mixer and the device on your computer and thats it! Quality audio to and from your PC or Mac. Three switches provide different send/return configurations for recording playback and utilising external FX. Build – The ZED-420 has been designed using individual vertically mounted circuit boards with each rotary control fixed with a metal nut to the front panel – making a much more robust product that will resist damage and give years of reliable use. ZED also has professional 100mm faders for ultimate control over your levels. SONAR LE – provided Free! – We have teamed up with Cakewalk to bundle SONAR LE with this ZED mixer. The two team up together in many ways – for example straightforward recording of a stereo mix recording tracks individually to build up a song or for inserting a SONAR LE effects plug-in. Features/Specifications: 4-band EQ with 2 swept mids and in/out switch 6 auxiliary sends (2 pre 2 post 2 pre/post) 4 sub groups fed from each channel L R and M main mix outputs Individual channel 48V phantom power Direct output on every mono channel 2 dual stereo inputs with 4-band EQ Peak and signal indication on every channel 2 matrix sections available; can send output to USB Configurable USB stereo audio in/out Master level controls on all outputs Easy to use layout – all connections and controls on top surface Cakewalk SONAR LE bundled with mixer Allen & Heath Recording-and-Computers EMF