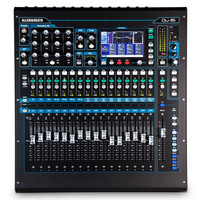 the Allen and Heath Qu-16 i s ideal for live studio and installation applications. Its a 16 channel mixer that takes digital mixing to a new level. With an innovative rack-mountable design and built in FX EQ and dynamic processing the QU-16 offers all the features youd expect from a class-leading mixer. This is the new chrome edition with updated firmware and chrome knobs.